Confused on just which weight class you are supposed to be in? Yeah trust me so is everybody else. Ibjjf weight classes can be confusing and overwhelming.

When I first got into BJJ I was totally confused to.

Ever since I first saw the Gracies take down opponents twice their size to the mat in the early 90s, I was hooked to Brazilian Jiu Jitsu.

It became our preferred martial art, (even more than Taekwondo or Karate) as I spent the next six years honing those chokes and pins. The thing with BJJ is that it has lots of applicable uses in today’s world where as the other martial arts just really do not.

As I have figured over the number of years of competing in all different weight classes and age divisions of BJJ, is that this martial arts takes true dedication and discipline to become a master of the art and come out on top. Jiu Jitsu is one mean sport that teaches you how to not only really defend yourself but also how to take down your opponent and play offense.

But when I first set out to compete in the IBJJF competitions, I discovered that there were a whole bunch of weight classes, which were very different from other sports.

For starters, there was GI vs. No GI. Then there were adult and master weight classes for men.

There were separate weight classes for females. Oh wait, there is also a different one altogether for juveniles.

I was so confused on not only what weight division would be best to compete in but which was I was even allowed to compete in!

It’s no wonder then that most first timers to IBJJF competitions find themselves at their wits end trying to figure out which weight class they would be eligible to compete in.

If you have found yourself trying to figure out the IBJJF weight class puzzle, then here’s a brief primer that will help you understand the different weight classes once and for all.

Before I get to the weight classes, there are two types of competitions that you can participate in. There’s GI, where you will be fighting with the BJJ GI (uniform).

In this category, you should be wearing the GI for the weigh in. Just like all competitive BJJ bouts, you only get one shot at the weigh in.

If you don’t make your weight class, you get disqualified. No refunds. No second chances.

You cannot change divisions either.

Not Wearing a GI

Then there’s ‘No GI’ in which you fight without a GI. In this category, you do not wear the GI for the weigh in. The same rules as mentioned above apply for this one as well.

Below you will find the weight class for the International Brazilian Jiu-Jitsu Federation. These classes are accurate for the year 2019-2021. Find Male, female, and juvenile weight divisions below.

There are 9 weight classes for males looking to participate in the adult and master divisions.

Below are the weight classes for the Juvenile age divisions. These are set by the International Brazilian Jiu-Jitsu Federation for 2019-2021. These are subject to change after 2021. 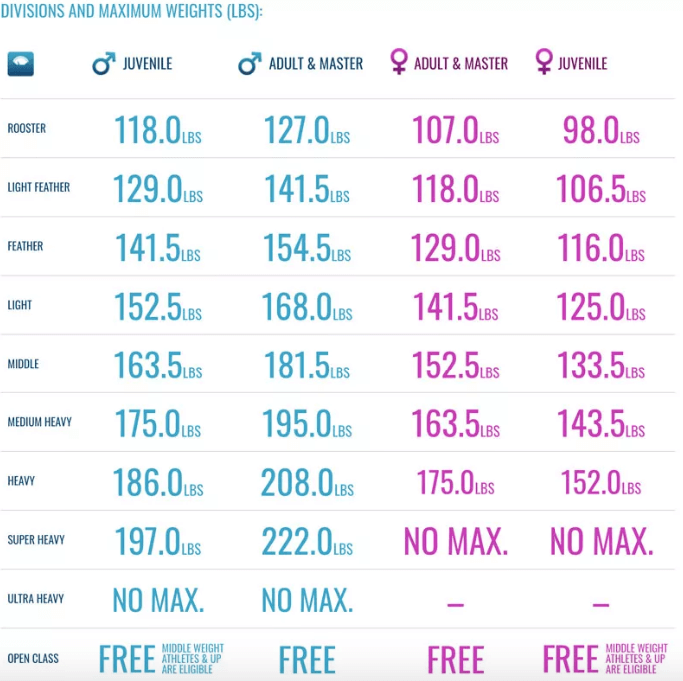 In the Juvenile division for men, there are the same 9 weight classes as in adults and masters. But with reduced weight limits.

Athletes who are middle weight and above, can also choose to compete in the open division.

The Juvenile division for females has the same six weight categories as for adults and masters, but with reduced weight limits. While there is no maximum age limit for participating in the adult and Masters division, which has started to open up a whole raging debate on messaging boards these days, there is definitely a minimum age limit.

In the Masters age division, there are different sub age categories:

Technically, even if you are 45, you can still choose to participate in the Adults weight class rather than fighting someone in the Masters division, which has its own share of pros and cons.

You can for example, compete against much younger, agile fighters which can be physically intimidating to some. But the caveat is that if you fight in the Masters, you might end up fighting someone with years of competitive experience.

Which one do you select? That’s the beauty of Brazilian Jiu Jitsu.

How Much Does a BJJ GI Weigh?

IF weight classes are separated by GI and no Gi then one thing that you might be wondering is just how much your BJJ Gi weighs.. Well this is a good question and this is something that you really should know if you do compete.

Most BJJ Gi’s weigh in at around 4-5 pounds. The best BJJ GI’s will typically be in the 4 pound range as they are built for both practice and competition.

Should I Compete in GI or no GI Class?

Now here’s the thing, if you are a beginner you should be training with both a GI and with no GI. Do not limit yourself to one or the other. You want to get as much experience as you possibly can while wearing one and not wearing one.

But if your goal is to compete and make it to the top levels then my suggestion is to most definitely train more often wearing your GI.

The reason being is that the top level guys and masters classes often only compete wearing a GI.

Should I Cut Weight To Get In a Lower Weight Class?

Many first timers and even top professionals come across this thought often in their BJJ careers. Will cutting weight to make a lower weight class help you prevail and beat your opponents in competitions?

Yes, it will. Lighter weight classes are indeed going to be less challenging than heavier weight classes and this is just fact. But here’s what you need to think about first.. IF you cut the weight will you be able to do it while still maintaining your strength and stamina or will cutting weight cause you to weaken up and not be able to compete?

Lots of fighters try and cut too much weight so that they can dominate the lower weight classes.. And honestly, this is smart. I’ve done it many times and I recommend you do the same thing.