Wrestling and Jiu-Jitsu are both very difficult disciplines of martial arts. Choosing one or the other can be difficult, and many newcomers wonder which one is harder.

Jiu-Jitsu isn’t harder than wrestling because wrestling requires more strength and athleticism than Jiu-Jitsu. Wrestlers are also required to stay in shape to compete in their weight class. Unlike Jiu-Jitsu that focuses on self-defense, wrestling focuses on all-around fighting techniques.

This article will discuss the reasons wrestling is harder than Jiu-Jitsu.

Why Jiu-Jitsu Is Not Harder Than Wrestling

There are many reasons why Jiu-Jitsu isn’t harder than wrestling. Wrestling is more of an all-around martial art, whereas Jiu-Jitsu focuses more on self-defense. This doesn’t mean that Jiu-Jitsu is inferior to wrestling. It’s just that there are more fighting techniques and other strict requirements that an individual needs to adhere to in order to take up wrestling.

Below, I’ll further discuss why wrestling is harder than Jiu-Jitsu and how the two disciplines are different.

While Jiu-Jitsu does require athleticism, it is encouraged for people of any shape and size to try it out. Jiu-Jitsu will improve your fitness overall and is a great way to get stronger, but it is much different compared to the grind of wrestling.

Many “ordinary” people decide to get into Jiu-Jitsu to learn self-defense and get stronger. That’s why you’ll see many people practicing it who may not be in great shape. This discipline encourages people of all shapes and sizes to join and learn how to defend themselves.

Wrestling is different from the all-inclusive nature of Jiu-Jitsu. The discipline requires fighters to be in great shape. A lot of cardio is required to stay active during a wrestling match. So, wrestlers need to stay fit at all times.

Diet also plays an important role in wrestling. Wrestlers need to commit to a strict diet to keep their body where it needs to be for competing. This helps them keep their body energized and within the same weight class.

Weight classes for wrestlers are another part of required athleticism. Not only do wrestlers have to be in great shape to compete, but they also have to maintain the same weight throughout the year. This means wrestlers can’t gain or lose a lot of weight; otherwise, they won’t be able to compete in their weight class. While Jiu-Jitsu is very technical, wrestling involves a lot of different challenges. Jiu-Jitsu focuses on taking down especially bigger opponents and subduing them. In Jiu-Jitsu training, you’ll learn many different techniques and intricate moves that get your opponent on the mat and force them to submit.

Wrestling doesn’t only focus on self-defense. It’s more of a well-rounded discipline that demands technique, quickness, explosiveness, and athleticism. Jiu-Jitsu is very technical, and wrestling is as well. Wrestling also requires you to attack and defend at any minute, whereas Jiu-Jitsu mainly focuses on defense.

Wrestling focuses on some aspects that Jiu-Jitsu leaves out. One aspect is a takedown, which are very commonly taught in wrestling and are basically drilled into a trainee’s brain. Typically, Jiu-Jitsu beginners do not focus on takedowns at all until they have been training for a significant amount of time.

Even though it’s a self-defense discipline, Jiu-Jitsu doesn’t focus on takedowns and often postpones teaching them until a more advanced stage of the training process. Takedowns are tricky to master, and it’s just one example of things wrestlers have to learn that Jiu-Jitsu fighters don’t.

3. Wrestlers Are Required to Be Fast and Explosive

However, being in the guard position means planning a strategy to make your opponent vulnerable. This slows down the fight quite a bit because it just becomes a tight struggle to out-maneuver and out-wit your opponent.

Because of this, it can sometimes appear that the fighters are not doing much when in reality, there’s quite a struggle between the fighters.

Wrestling is different from Jiu-Jitsu as far as pacing because wrestlers are often encouraged to be explosive. The goal of wrestling is to be quick, while Jiu-Jitsu requires patience. This means that the pace of a wrestling match will be faster and more intense than Jiu-Jitsu.

4. Jiu-Jitsu Does Not Require as Much Strength As Wrestling

We’ve talked about the athleticism required to be a wrestler, but one huge aspect that makes Jiu-Jitsu easier than wrestling is the comparative lack of strength required. Jiu-Jitsu trains defensively, meaning that you’ll learn to use your opponent’s strength against them. This isn’t merely a contest of strength – it’s much more technical.

Wrestling is the opposite. Wrestlers learn to use their own strength to force their opponent to the mat using takedowns. Most of the wrestling is technique mixed with brute force. It takes a lot of strength to bring your opponent down and force them to the mat for a pin. That isn’t something that Jiu-Jitsu trains.

A lot of training for Jiu-Jitsu involves waiting for your opponent to strike and predicting their movements. If done correctly, it allows you to use their force against them. For example, if someone is charging at you as hard as possible and you move out of the way, they’ll need to stop their own full-force movement.

This is what Jiu-Jitsu teaches. So, it’s not about how strong you are but how well you can use your opponent’s strength to your advantage. 5. Explosiveness in Wrestling Uses a Lot of Energy

Holds are common in both wrestling and Jiu-Jitsu, but how fighters escape holds are completely different for each discipline. Jiu-Jitsu doesn’t require much strength to escape holds because the goal is to avoid them or plan how to escape them.

Wrestlers instead force their way out of holds. They do this with explosiveness or using a lot of energy to overpower their opponent for the duration of time it takes to get out. Because explosiveness can be used often during a match, wrestlers need to be ready to exert a lot of energy all at once while still having enough left in the tank to get them through the rest of the fight.

This requires much more intense workouts and fitness regimens from wrestlers because they need to use a lot of energy throughout the match. It’s also part of why diet is so important in wrestling because eating the right food will help you bring that energy to the mat.

This is unlike anything found in Jiu-Jitsu. What truly sets Jiu-Jitsu apart from wrestling is the patience of waiting for an opponent to move in a way that allows for having the upper hand. That’s why you won’t see explosive moves in that discipline, and when training, you don’t need to focus much on conditioning like wrestlers.

6. It Takes a Lot Less to Lose a Fight in Wrestling

The goal in any Jiu-Jitsu competition is to force your opponent to submit or have more points when the match ends. Particularly when losing a match via submission, this means you have gotten yourself into a very vulnerable position.

This takes a lot of effort from your opponent to make it happen, and many Jiu-Jitsu fighters can spend a lot of time in a very uncomfortable hold before tapping out.

Wrestling is a lot more fast-paced. In matches, your opponent would only need to get your shoulders pinned to the mat for two seconds in order to beat you.

This means that you need to always be aware of what your opponent is doing during a wrestling match and overpower them if necessary. Just two seconds of vulnerability can be the difference between a win and a loss.

Wrestlers can lose a match because of being caught off balance for a short time, making wrestling a very difficult discipline. Two seconds is not a long time to be on your back, and it goes by faster than you would think. So, wrestlers always need to remain vigilant during a match to prevent an even two-second loss of focus or control.

Your body needs to be conditioned to react very quickly to what your opponent is doing, and it needs to be able to power out of an attempted pin without using up all of your energy.

Jiu-Jitsu teaches fighters to avoid those holds in the first place by focusing on defensive moves. While your opponent can quickly get the upper hand if you lose focus, you still need to give up the fight to be called early.

Wrestlers only need to touch their opponent’s shoulder to the mat for 2 seconds. So, both disciplines are challenging, but wrestlers can lose a match a lot faster.

Wrestling is harder than Jiu-Jitsu because it is considerably more athletic. Since wrestling is an all-around sport, wrestlers are required to master many types of self-defense techniques, even the ones that are often not focused in Jiu-Jitsu.

Since many people practicing Jiu-Jitsu learn it for self-defense, it’s not surprising that some may not be fit. Wrestling, however, requires all wrestlers to stay in shape all the time. 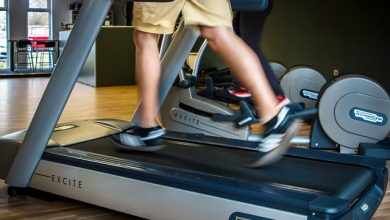 TRX Review: Is This Suspension Trainer Really Worth My Time? How Much Does A Trap Bar Weigh? How To Deadlift & Squat With A Hex Bar