If you’re interested in martial arts, you’ve undoubtedly come across these fighting disciplines. If you’re new to the scene, you probably have questions like, What are they, and how did they come to be? Is one better than the other?

Worry not! This article will help you understand the key differences between Jiu-Jitsu, BJJ, and MMA.

Jiu-Jitsu came first. The practice of Jiu-Jitsu originates from Japan, back in 1000 AD. It was invented as the method of hand-to-hand combat used by Samurai warriors.

Samurai used swords for combat primarily, but they also needed a hand-to-hand alternative as a last resort. In order to remain effective when disarmed, Jiu-Jitsu was created, and Samurai were considered dangerous even when disarmed.

In 1600 AD, Japan entered a time of peace, and Samurai became unnecessary to maintain order. Despite the lack of wars to fight and Samurai to train, Japan held onto the history of its martial art and began teaching Jiu-Jitsu outside of combat scenarios.

It was believed to be important for citizens to learn and have a working knowledge of Jiu-Jitsu. Both because martial arts types are a large part of the culture, and in case the peace was broken once again.

Japanese Jiu-Jitsu remained largely unchanged from the days of the Samurai until the 1900s when the Gracie family adopted the fighting style and modified its focus to be almost completely about ground fighting and grappling. Putting your opponent on the mat was to be the most important thing

The Gracie family was from Brazil, hence this adaptation of Jiu-Jitsu being named BJJ. BJJ draws inspiration from Judo, which also originates in Brazil.

BJJ is more popular than Jiu-Jitsu today due to UFC fighters demonstrating how effective this form of Jiu-Jitsu is versus other fighting styles. The fighters who practice strict BJJ are often competitive against those who practice a broader form of martial arts.

Difference Between Jiu-Jitsu and BJJ 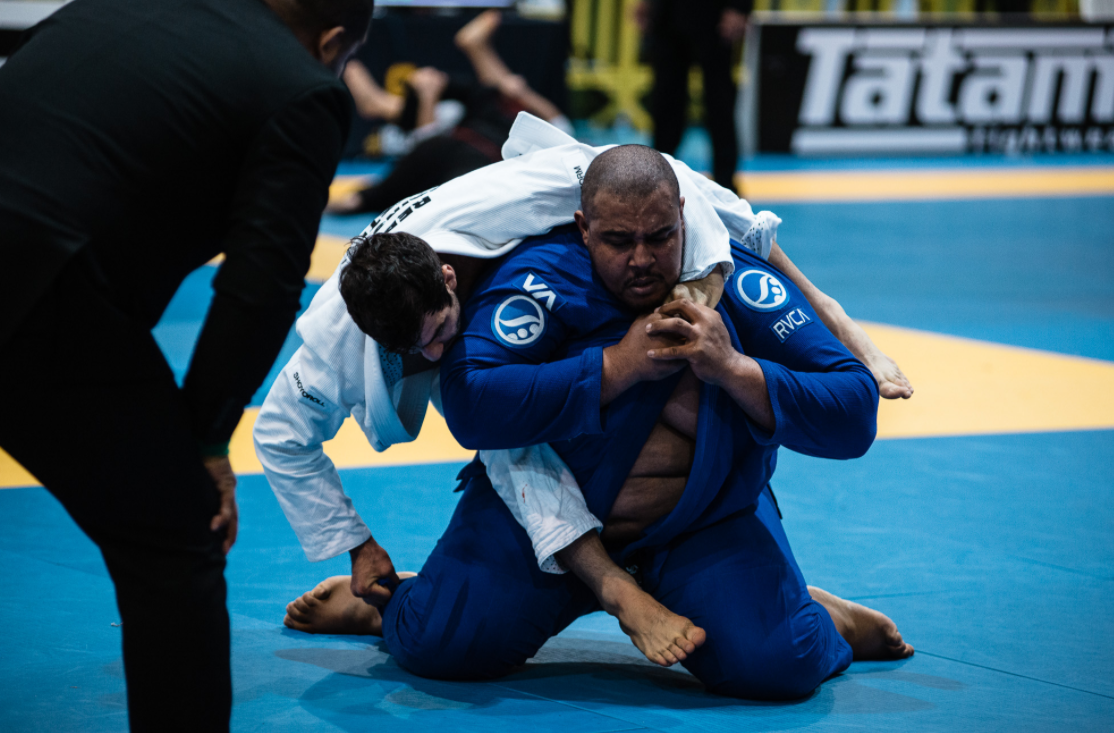 Jiu-Jitsu and BJJ both place importance on using your opponent’s weight against them and are focused on self-defense. With that in mind, there are a few key differences.

Jiu-Jitsu uses striking techniques in addition to grappling, body throws, and joint attacks to subdue an opponent. The focus is primarily on preserving the traditional fighting style and is useful for real-world defensive scenarios due to its heritage.

There is no sport or competition aspect of Jiu-Jitsu. If you want to compete in Jiu-Jitsu matches, you will need to train in BJJ.

Brazillian Jiu-Jitsu, on the other hand, is practiced primarily for sport and competition. It is focused entirely on ground fighting -that’s why it’s a good idea to wear BJJ headgear because it helps if you fall on your head- and learning ways to get your opponent on the ground from a standing position. This form of Jiu-Jitsu is the most practiced form by those who intend on competing in MMA. With an understanding of the two forms of Jiu-Jitsu, we can now explore the differences between them and MMA.

The competition in MMA is fierce, with fighters unsure of what techniques their opponent will use during the fight. To be competitive in MMA, you will need to master portions of several different fighting styles so that your weakness is not exploited. Also originating in Japan, Karate is a fighting style that focuses primarily on defense. Learners are taught how to deflect and redirect attacks instead of going on the offensive. This fighting style uses strikes to disable opponents. Muay Thai focuses on striking and is known as “the art of eight limbs”. Those trained in Muay Thai will use their fists, elbows, knees, and shins as weapons to strike their opponents. Kickboxing has its origins in the United States and was first recognized in the 1970s. This style of fighting was developed by Karate instructors who were not satisfied with the striking rules of their chosen martial art.

Kickboxing has many techniques but is primarily focused on using your legs as a primary method of attack and defense. These techniques make kickboxing similar to Muay Thai. Boxing is one of the most recognizable and oldest fighting styles in the world today. Boxers use only their fists to deliver punches to their opponent and this makes boxing easy to learn because of its simplicity and that is also what differentiates boxing from MMA.

Boxing has different techniques even though you are only using your fist. and has a simple set of rules; how is the match won, number of rounds, etc. Taekwondo is a fighting style that emphasizes kicks, similar to kickboxing. The kicks in Taekwondo tend to be delivered while spinning for extra power, and are often aimed at head height for maximum effectiveness and damage.

Taekwondo places strong importance on biomechanics, and users are taught how to get the most out of their kicks with theories backed in science. Sambo is a Russian fighting style that is similar to wrestling and Judo. Practitioners use takedown techniques and grappling to subdue their opponent. Judo is similar to Jiu-Jitsu and focuses on takedowns and pinning your opponent to the mat through the use of joint locks and submission holds. Practicing Jiu-Jitsu or BJJ is practicing a single fighting discipline.

MMA was designed to incorporate fighting styles from multiple disciplines. This style of fighting was created to allow its users to hold their own against others regardless of what their opponent’s background is.

How to Win a Jiu-Jitsu or MMA Fight

One way to highlight the differences between Jiu-Jitsu and MMA is to simply look at what is considered winning in each martial art. These objectives give insight into the overall design of the technique and the expected results.

How to Win a Jiu-Jitsu or BJJ Match Interestingly, Jiu-Jitsu does not have a competitive scene. There are no organized Jiu-Jitsu matches, and it is practiced as more of an art than a competitive fighting style.

In BJJ the primary objective is to force your opponent to submit through grappling or joint locks. If no one submits, points are awarded based on the technique used by each fighter during the fight.

The dominant fighter with the most points will be the one who demonstrated the most control over their opponent during the match. It’s important to note that you cannot win a Jiu-Jitsu match by knocking your opponent out via striking.

How to Win an MMA Match There are several ways to win in an MMA match due to the various fighting styles allowed. Unlike Jiu-Jitsu, a fight in MMA can be won through knockout, submission, or technical knockout.

If by the end of that match no one has submitted or been knocked out, points are awarded based on successful attacks on your opponent of any kind.

Which Style Is Better in A Street Fight?

MMA, due to the variety of styles and techniques it draws from, would be your best bet in a street fight. Being a well-rounded fighter that can strike, grapple, and take your opponent to the floor if needed is very important in a street fight.

Remember, you have no idea whether your opponent is untrained or a grandmaster martial artist. If they are untrained, both fighting styles would be adequate, but having options and the ability to adapt to the situation in a street fight is always a good idea.

Who Wins a Fight Between Jiu-Jitsu and MMA Practitioners?

If you placed two fighters of similar skill level against each other, one trained in MMA and one trained in Jiu-Jitsu, the fighter trained in MMA would have the advantage. Jiu-Jitsu is extremely effective at taking down opponents who are untrained in takedown prevention but can fall short when your opponent can prevent the takedown altogether.

Unfortunately for the Jiu-Jitsu practitioners, the threat of Jiu-Jitsu and it’s takedown and grappling power was recognized early on in the history of the UFC. Royce Gracie, of the Gracie family, dominated the first UFC through his use of Jiu-Jitsu, as none of his opponents could defend against his takedowns or grappling attacks.

This has changed drastically over the years. All MMA schools today teach grappling and striking, as you can see by the list of fighting styles that they cover. Teaching grappling involves teaching takedown defense, and a competent mixed martial artist will emphasize learning takedown prevention and grappling.

The fighter trained in Jiu-Jitsu would also have little defense against the variety of striking techniques employed by those trained in MMA. While they will undoubtedly be the better grappler, a well-aimed judo head kick is not something they have trained to defend against.

Should I Train in Jiu-Jitsu, BJJ, or MMA?

This question depends entirely on what you hope to get out of your training.

If You Want to Be the Best All-Around Fighter

It would only make sense for you to train in MMA. MMA provides a wide range of techniques derived from all major fighting styles. It was designed specifically to be used in sport combat against other well-trained opponents.

If your goal is to become the best fighter you can be, MMA is the way to go.

If You Want to Be a Grappling Master You would be best served by training in BJJ. Brazilian Jiu-Jitsu takes traditional Jiu-Jitsu and focuses entirely on its takedowns and ground fighting techniques. There are very few styles of fighting that can compete with BJJ when it comes to ground fighting specifically.

If You Want to Defend Yourself You’d probably be fine with any of these options. Most people are not trained fighters and have never purposely engaged in combat with another individual. Having any sort of fighting background and being comfortable during a fight give you a huge advantage over an untrained combatant.

With that said, MMA would technically edge out Jiu-Jitsu and BJJ due to its more well-rounded approach to fighting and defense. Whatever your opponent tries to do, you’ll probably have practiced before.

If You Just Want a Good Workout Each of these fighting styles is a fantastic workout. MMA places slightly more focus on cardio training I love using my Century Cardio Wavemaster to train for MMA and do some cardio as well, on the other hand, the intense grappling sessions in Jiu-Jitsu will absolutely tire you out. If you have some hesitation about being constantly locked up against another person, MMA offers striking and cardio training in addition to the grappling practice.

In the end, picking the style that is most interesting to you is the way to go. After all, we live in a society where unsanctioned fighting is illegal. Learning to fight is done for recreation and martial arts is a great sport that should be enjoyed.